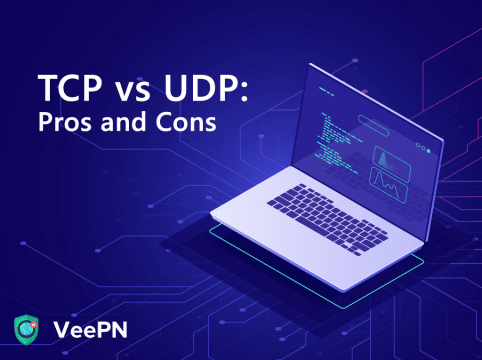 Which Protocol is Better: TCP or UDP?

This is one of the fundamental questions of the world, standing alongside such eternal questions as “coffee or tea” or ‘’iOS or Android.” While those two are more based on your preferences, TCP vs UDP is rather a question depending on the situation. Let’s find out when you should use TCP, and when it’s better to opt for a UDP to achieve maximum security and productivity.

What are TCP and UDP?

TCP (Transmission Control Protocol) and UDP (User Datagram Protocol) are both communication protocols that allow our devices to connect to the Internet, send data and receive it back. These protocols govern how the data is being divided into packaged, addressed, transmitted, and received. TPC is actually one of the “father founders” of the Internet, as we know it today, as it was the one launched with the IP. The full name actually sounds TCP/IP.

UDP was developed almost six years later after the appearance of TCP. So, if those are both protocols that are used to make the Internet work (this is a ve-ery simplified explanation), how are they different? And do we really need the two of them? Let’s find out.

Well, as we’ve already mentioned, the two are protocols used to send data packets. These data packets are just small pieces of data transmitted over the net. For example, if you are sending a letter or accessing a website, it’s divided into small packets and transferred to you.

Secondly, both of them are operating on top of the IP. Both of them also route data from your device to different routers by using ports. In other words, they act as a traffic-controller of the Internet.

In short, the one’s fast, while the other’s furious more stable. Let’s elaborate on that a little.

This protocol is more stable and more common in today’s online realm. However, it’s also a slower one among the two. When you go to a website, your device sends a request to the server. The server then responds by sending you back a streak of numbered TCP packets, which are then stitched together by your browser to look like the normal webpage we are all used to seeing.

So, here’s the main thing – TCP protocol is basically a continuous communication between you and the target server. The protocol even targets and checks the packets, to ensure that you get all the data bits in the correct order. In other words, TCP is a reliable one, and it is useful when details matter.

For example, losing a part of a Wikipedia page can be crucial, while losing 5 seconds of a movie due to a glitch is simply annoying. We doubt that it will disturb the overall understanding with the plot, though.

However, due to all the constant two-way communication and numerous checks embedded in this protocol, it’s slower than the counterpart below. TCP is great for information-related online activities, such as page browsing, sending emails, checking your bank account and so on.

When you need speed rather than reliability, choose UDP. Of course, it’s still pretty reliable – how it would make it to the standard protocol suite otherwise? – just not as reliable as TCP. UDP is the kind of “good hair, don’t care” protocol. Why? Because it doesn’t bother itself with any double-checking and sending requests.

UDP just fires data at you as a huge data canon, without any regard of whether you get it or not. Does this mean that TCP is better, and the secret to safe and happy Internet browsing? Well, no. At least if you intend to watch movies and listen to music, this won’t work that well.

While UDP doesn’t do any kind of error-checking, removing the extra steps can easily improve the speed of your connection. This means that UDP is a great choice for streaming media content. Will you get all the packages? Probably not. Is it crucial? No.

Glitches and freezes are unpleasant, but not that critical when it comes to video content. As soon as the streaming resumes, a one-second glitch won’t do much to your understanding of the plot of a whole episode. But if three paragraphs of a Wikipedia article fall out due to a TCP failing, you are kind of in the hard place.

Which One is Better?

It depends on your end goal. If you need a reliable connection with all the double-checks and a server that makes sure you get all the packets in the correct order, go for TCP. When you are up for some media streaming or gaming, UDP is your best choice, as it allows continuous data streak without minding a couple of lost packets.

All in all, as with nearly everything in our lives, you need both for epic and satisfying browsing experience. And don’t forget to protect your online personality with good old VeePN.

VPNs against Viruses & Malware: Yes or No?

Malware…viruses…you must have heard of them at some point. But we’re sure those weren’t good things — malware is infamous for stealing and deleting data, spying on you, damaging your hardware, and much more. So, it’s something you’d obviously want to avoid.  A powerful cybersecurity tool, a VPN, could have crossed your mind in this regard. But is it effective…