Quick Navigation
1. What is the MyDoom virus?
2. How does MyDoom work?
3. The history of MyDoom virus
4. Who stopped the MyDoom virus?
5. Is MyDoom still active?
6. How to tell if your computer is infected
7. How to protect yourself against viruses and other malware
8. Bottom line
9. FAQ

The Darkest Malware to Exist: What Is MyDoom Virus and Can It Hurt Me?

An estimated 38 billion dollars. Or the damage caused by one computer virus, MyDoom. Considered the most notorious malicious type of software in history, MyDoom is a computer worm that affects Windows devices. It has infected millions of computers worldwide since 2004 and is still active. Want to learn more about the virus and how you can keep yourself safe? Read along to find out.

What is the MyDoom virus?

MyDoom virus is the fastest-spreading email worm and the most damaging computer virus to this day. Also known as Novarg, [email protected], Shimgapi, and Mimail.R. MyDoom was made to create zombies out of hundreds of thousands of computers. The code was:

How does MyDoom work?

This tiny bit of code spreads from one computer to another via malicious email attachments. After a victim clicks on the attachment, MyDoom gets inside their operating system, scans the address book, and sends emails to all the contacts on the list. Those contacts then open the infected email from what seems like a trusted source and infect their own computers. And so it goes.

That said, the MyDoom worm:

But how did it manage to spread so fast? Let’s look at the facts one-by-one.

The history of MyDoom virus

January 26th 2004. Tens of millions of commuters make their daily drive to offices. They sit down to open their emails — each person’s inbox is unique, but a few workers can’t help but spot one email amongst typical messages. That email’s message varies — for some it’s a failed delivery notification, for others it’s a simple “hey there!”. Wary of an unknown email address, most people think it’s spam. However, a few handful of people do open the email. And several actually click the attached link. That’s all it took to unleash MyDoom — the most expensive computer virus in history.

Here’s how it went down from then on.

Who stopped the MyDoom virus?

Mydoom, or at least its B variant, was the architect of its downfall. MyDoom.B had bugs that didn’t let the code spread as quickly as the A version. So, when the DDoS attack against Microsoft was laucnhed on February 3, 2004, the botnet wasn’t large enough to take down their sites.

Yes. Although now well past its heyday, MyDoom is still in the picture with the same tactics. However, in 2019, the analysis by Unit 42 showed that it makes up just 1.1% of all email traffic worldwide. But for such an old virus, that’s actually impressive. The vast majority of IP addresses distributing the virus are in China, the US, and Great Britain. MyDoom distribution has its old phishing tactic — email subject lines lure the user into opening an attachment sent from a spoofed email address.

How to tell if your computer is infected

Have a feeling that your device may be infected with MyDoom or other malware? MyDoom is a sophisticated worm, so it can be hard to notice any difference for non-experts. However, you should look out for the following signs — MyDoom or not, they indicate something is off with your computer.

Unfortunately, no solution can keep you 100% safe from malware. Especially when you voluntarily click on a suspicious link. But there are some precautions you can take to reduce risks of getting your device infected.

How to protect yourself against viruses and other malware

Maintaining digital hygiene may prevent you from falling victim to different types of malware. Follow these steps to minimize risks.

Although its glory days are over, MyDoom remains a serious threat. To recap:

Even if you don’t have billions of dollars to lose, you still have to keep yourself protected when browsing online. In this case, consider getting a trustworthy VPN service. VeePN keeps you safe by hiding your IP address and encrypting your private information. And although virus protection isn’t on VPN’s job description, it does keep you safe against some types of attacks.

Use a VPN to keep your data from being exposed to bad actors. The very same kind who might try to infect your device with malware.

What does MyDoom virus do?

This computer worm affects Windows devices. It spreads from one computer to another via malicious email attachments. After a victim clicks on the attachment, MyDoom penetrates the device, scans the address book, and sends emails to all the contacts on the list. Learn more in this article.

Is the MyDoom virus still around?

Although well past its prime, MyDoom is still in the cyber landscape. 1.1% of global email traffic still contains the worm. Phishing tactics are usually used to spread MyDoom, with cybercriminals exploiting human weaknesses to fish out sensitive information.

Was the creator of MyDoom ever found?

Some experts felt that MyDoom resembled other worms developed in Russia. However, no one knows exactly who created this code. It’s believed that MyDoom’s real purpose was to grant whoever unleashed it a backdoor access to Microsoft and SCO Group’s computers.

Is Likee Safe for Kids or Should You Be Concerned About It?

Often hailed as TikTok’s younger sibling, Likee is a fresh face in the short-video creation and sharing field. The app has over 500 million downloads on Google Play Store only and is especially popular among сhildren. It’s supposed to be a fun video platform, where users get creative, share their videos, and get in touch with others. What’s not to… 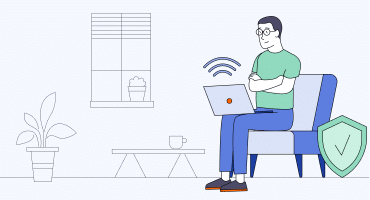 VPN to Home Network: Do You Really Need It?

When you’re away from home, browsing the web can be far from safe. Public networks pose numerous risks to your cybersecurity, so when you’re outside, it’s critical to strengthen your defenses. In this case, a virtual private network (VPN) is your best bet. It protects your data by rerouting your traffic through a VPN server and encrypting it along the…